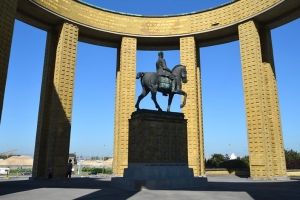 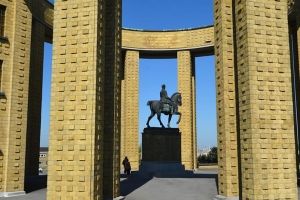 The King Albert Memorial is a war memorial in the Belgian coastal town of Nieuwpoort. It is just outside the old town, on the right bank of the IJzer, at the the Ganzepoot. The monument was erected in 1938, designed by Julien de Ridder, in honor of King Albert I and Belgian troops in the First World War.

The monument is circular, with a diameter of 30 meters. It has ten columns with flat intersections of 1 meter by 2 meters, built of bricks from the plains from de IJzer. On top is a circular bar, with a circumference of 100 meters. On this ring beam lies a walkway with orientation tables. It is situated on a cruciform terrace of 2500 m².